Yet Another Podium for the RX Cartel!

The World Rallycross Championship came to the famous home of Belgian F1, Spa Francorchamps, where EKS and Monster Energy RX Cartel, both supported by KYB and using KYB dampers, battled for glory during a weekend of intense action and varying weather conditions. Andreas Bakkerud came in second place to make it three podium appearances in three for the brand new Monster Energy RX Cartel team. The Norwegian driver started in pole position after a superb weekend of racing but ran wide on the first corner allowing Timerzyanov to come through and hold on for an emotional and well deserved first ever WRX victory.

Bakkerud’s RX Cartel team mate Liam Doran also enjoyed a great weekend’s racing, also making the final and securing vital championship points to keep the RX Cartel in the hunt for the team championship. The British Bomb was quickest of them all in Qualifying 2, however his highlight of the weekend surely has to be overtaking in mid air in the jump before the finish line, taking third place by less than one tenth of a second and progressing to the final. Doran was making great progress in the final, before an unlucky collision before a crucial hairpin bend damaged the front of his car (including the KYB logo!) and put him to the back of the field.

EKS team boss Mattias Ekström returned to WRX on a wildcard entry, racing in his 2016 WRX Championship winning Audi S1 EKS Quattro with some striking new livery, complete with the KYB logo across the bonnet. This was Ekström’s 50th WRX race, this time racing for JC Raceteknik. The two-time DTM Champion did superbly to reach the semi-final, posting the third quickest time in Qualifying 3. Ekström was unlucky to be hampered mid race in the semi-final, ending his chance to race in yet another WRX final.

EKS driver Krisztián Szabó also did great to reach the semi-final, achieving the third quickest time in Qualifying 1. The Hungarian raced hard in the semi-final, but had it all to do, racing from the back of the grid following an unfortunate collision which put him out of the race completely in Qualifying 4. The EKS engineers and mechanics worked tirelessly to get Szabó back on track for the semi-final, securing more vital Championship points for the team. 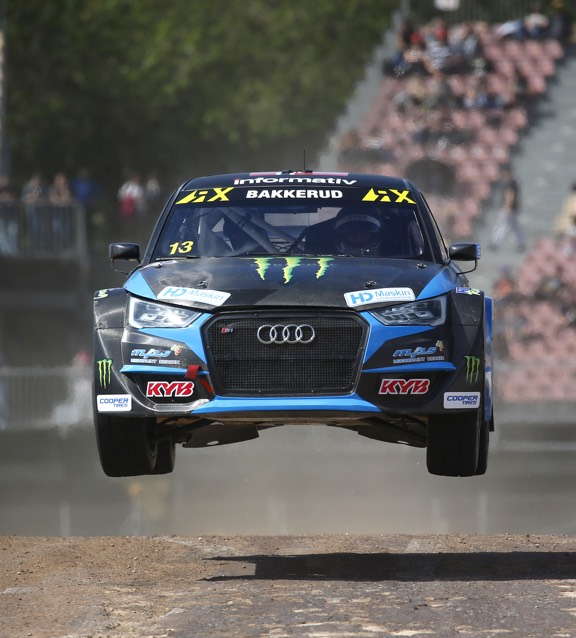 KYB is a proud partner of EKS and the RX Cartel as they battle it out for the FIA World Rallycross Championship. Both teams use KYB dampers and electronic power steering and are supported by expert KYB engineers at races and during testing. All eyes are now on Silverstone this weekend!