It was another weekend of what-ifs and maybes as all KYB affiliated World Rallycross drivers ran into bad luck in Holjes, Sweden, in another pulsating action-packed round of the 2019 Championship. A mixture of vehicle issues, wet weather and the famously carnage-causing turn one all played their part this weekend which delivered some impressive highs, and some unfortunate lows.

EKS lead driver Krisztian Szabo started well in his team’s home event, finishing Q1 in 8th place. Q3 saw the Hungarian driving strongly behind Andreas Bakkerud before a vehicle issue sent him spinning on his way out of a turn. His luck was also not with him in Q4, again driving well until he caught the exit of the joker lap and was sent spinning off track, meaning he did not make the semi-finals. He remains in 10th place in the Driver Championship.

It was a mixed day for Liam Doran who suffered a puncture in Q1 when going well, then having to nurse the car around and receiving a final shunt into the wall at the end of the race. The driver and car were OK for the second race, however the car went spinning off track following the jump. Luck escaped the British Bomb in Q3, getting the best start off the line but getting a nudge into the rear of the car before the jump, sending him into a spin and to the back of the pack. Doran showed what he can do in Q4, winning his race and winning an enthralling battle with Chicherit. 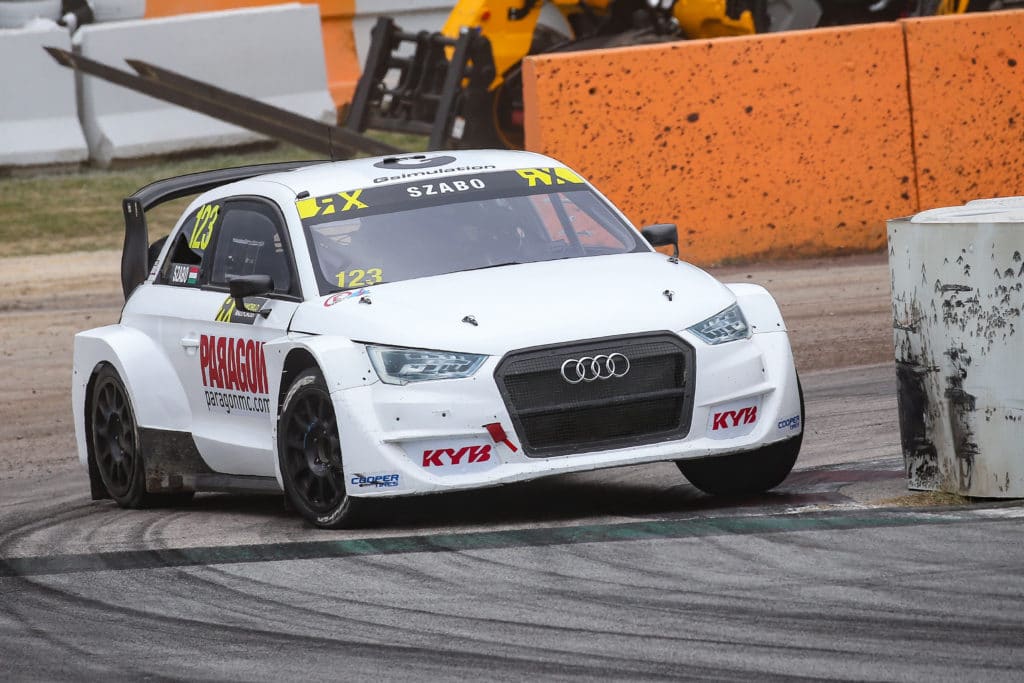 Day 1 belonged to Andreas Bakkerud once again. Winning his race in Q1 and finishing fastest overall, he went on to win his race in Q2 in a very strong field, winning again in Q3 and again going fastest of them all. The Norwegian finished the day as TQ and went into semi final 1 in pole position. Sadly, day 2 saw his luck run out. He raced to the front and lead for a lap and a half, before a broken driveshaft slowed the car. Bakkerud managed to keep the car going for the full 6 laps in order to collect a Championship point. He retains his position in 3rd place of the Driver Championship, the Monster Energy RX Cartel team also hold onto third place.

Another weekend of action reminds us of why WRX is one of the most exciting Championships on the FIA calendar. Cars spinning, contact between rivals, vehicle issues and changing weather all add to the drama – making Robin Larsson’s 3rd victory out of 3 Euro RX races even more impressive. Driving for JC Raceteknik with KYB dampers and EPS, the Swede dominated his home event, winning Q1, 2nd in Q2, winning Q3, Q4 and his semi-final and final to delight the home crowd.

KYB is a proud partner of EKS and the RX Cartel as they battle it out for the FIA World Rallycross Championship. Both teams use KYB dampers and electronic power steering and are supported by expert KYB engineers at races and during testing. All eyes are now on Trois Rivieres, Canada on 3rd and 4th August.